Cookies remember you so we can give you a better service online. By using this website or closing this message, you are agreeing to our Terms of Use.

Our direct line number is:

Or email us at:

Send us a message

Sign up for our newsletter to receive the latest news from Andorra and great offers!

Please enter your email address below to receive our emails:

Skiing vs Snowboarding – Which is Easier To Learn?

Posted in Andorra ski tips by Brett on 15th January 2019 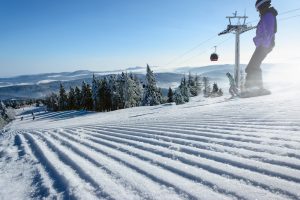 A friend of mine who had never been to a ski resort let alone ski or snowboard once said to me, I’m going to try snowboarding first. My first thought at the time was good luck with that but comparing the two is not as simple as that and my friend may have had the right idea attempting to snowboarding first rather than learning to ski.

Despite the popular myth that mastering snowboarding is harder, for some people it actually be a more enjoyable way to master the slopes than skiing. So let’s look at each stage of a novices journey to see how they stack up.

You might see plenty of snowboarders flat out in the snow or struggling to gain a hold of a ski lift while trying to get up a slope and this perhaps reflects just how hard it is to master the basics. Skiing on the other hand is relatively straightforward for a complete novice to learn.

Skiing starts with gaining the ability to put the skis on, balance on the skis then learning to use the pizza position (the fronts of the skis pointing in an arrow shape) to apply the breaks.

Snowboarding on the other hand is about using your heel and toe edges to steer the snowboard and balance while at the same time having only 50% of the peripheral vision enjoyed by skiers.

This makes snowboarding far more difficult for a novice to master at the beginning but once this basic technique is mastered then further practice can see you progress quickly.

While we have established that mastering basic techniques in snowboarding will have you progressing quickly, skiing becomes more difficult when you are trying to progress beyond relying on the pizza position to control your speed. Using the pizza to slow yourself even on a bumpy blue run will probably have you careering down the slope and completely losing control.

With snowboarding, the you will be perfecting those beginner techniques and readying yourself for greater challenges. You will tend to fall more heavily and more often if you haven’t got the correct technique which is where you will need to call upon any reserves of courage you have to move it to the next level.

You will need to start mastering linking turns to reach intermediate level and much like skiing, things will start to get more difficult when you try to move beyond this level.

Most experts say skiing is a more technical sport to learn and you can spend years perfecting your body position, experimenting with new equipment and challenging yourself on different slopes.

Snowboarding is also a technical sport and moving to an advanced level means you will need to have mastered carving and be comfortable on red and black runs. At some point you are also going to want to try jumps which will require you to be brave and put up with a few knocks.

So which is easier to learn?

Paying for an instructor will help you progress more quickly in both sports and one isn’t necessarily more difficult than the other to learn. It’s just that the major challenges come at different stages and why you will find the majority of people opt to ski as a beginner rather than risk the many falls that will almost inevitable be a factor when learning to snowboard.